The largest rough diamond ever mined in North America — the fancy yellow “552” — made its final public appearance at Phillips auction house in New York City on Sunday. And we were there. 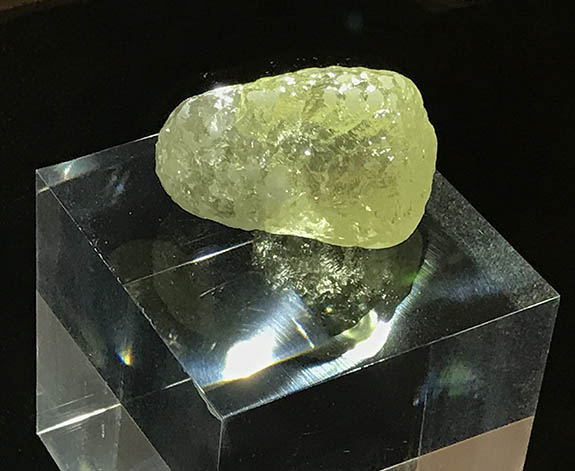 Exhibiting a frosty surface and distinctive bi-color transition from intense yellow to nearly white, the 552-carat diamond seemed surreal in its glass case at the street-level exhibit hall of the famous auction house on Park Avenue and 57th. Giant vertical banners in the Phillips windows delivered a bold and simple message, “Think Big — 552 Carats.” It was the public’s final opportunity to see one of nature’s true wonders — before it gets transformed into faceted stones. 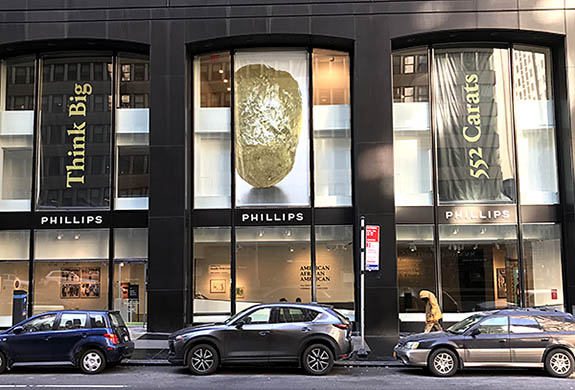 Inside, a solitary glass case illuminated by two spotlights and watched over carefully by two armed guards provided the temporary home to the “552.” The spectacular diamond had been found at the Diavik mine in Canada’s Northwest Territories back in October, and Phillips’ executives pitched Dominion Diamond Mines with the idea of putting the diamond on display in New York City before it went through the cutting process. 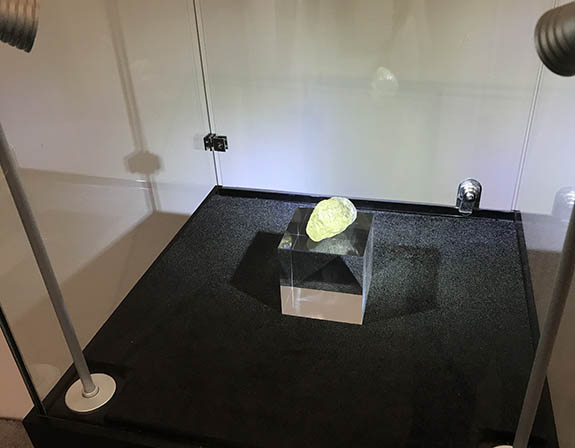 Dominion Diamond Mines Director of Marketing Rachel Aaron told us that there are two likely outcomes for the egg-sized “552.” In scenario one, the rough diamond would yield a primary faceted stone of 150 to 200 carats, as well as a number of residual faceted diamonds. In scenario two, cutters would opt for a pair of primary diamonds in the 70- to-100-carat range, plus the residual stones. The pair of smaller diamonds, she said, would be considered more wearable. 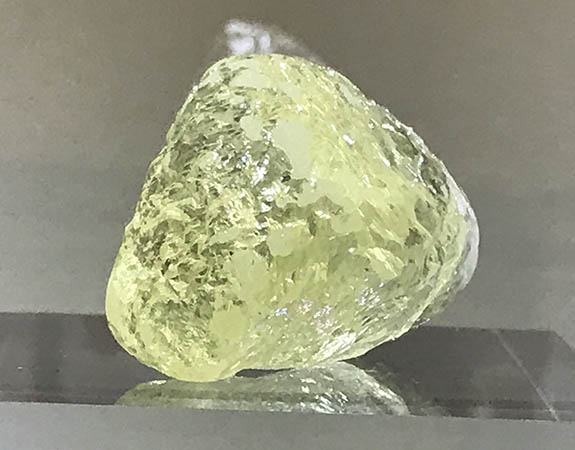 Aaron said that only four or five cutters in the world are capable of handling a fancy yellow diamond of this magnitude. Dominion has yet to select a cutting partner.

She also noted that once the diamond is cut, all the finished stones will return to Phillips for a special exhibition. She said the mapping and cutting process should take about nine months and the Phillips exhibition will likely be a year from now. 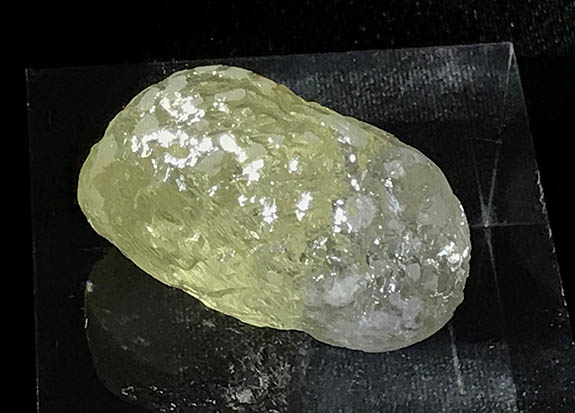 There are a number of characteristics that make the “552” unique. On close inspection, one can see a clear transition in color about two thirds of the way across the diamond. It goes from a clear, vibrant yellow to a cloudy white. Aaron said that gemologist believe that the transition point could reflect an internal fracture.

There are also obvious scars on the surface of the stone. These represent the beating the rough diamond took during the sorting and screening process. The Diavik processing plant is optimized to recover smaller diamonds, but Aaron believes the shape of the stone saved it. The stone turned vertically during the screening process and was just the right size to fit through. Had it stayed horizontal, it would have been crushed. 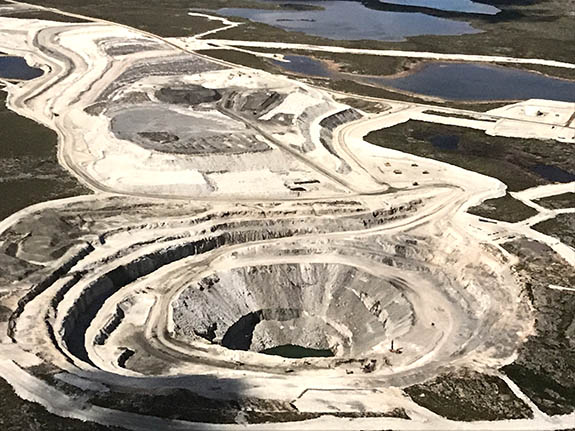 Aaron said the mine is not planning to change it’s recovery methods to secure more super-large diamonds. The mine has been specializing in smaller, fine-quality diamonds since 2003 and there’s no indication from their geological surveys that other super-large diamonds are likely to be found.

The gem’s yellow color is also an anomaly at the Diavik mine. Diamonds from the mine typically rate in the D, E and F color range (colorless to near colorless) and usually boast a clarity rating of VS or better. Dominion reports, however, that a small portion of Diavik’s production exhibits varying shades of brown, orangy-brown, light pink and light purple.

Despite its impressive dimensions, the “552” rates only 25th on the all-time list of the world’s largest rough diamonds, just ahead of the Lesotho’s Letseng Star (550 carats) and just behind the Central African Republic’s Spirit of de Grisogono (587 carats). The top seven diamonds on the list are all from the continent of Africa, including the granddaddy of them all, the 3,106-carat Cullinan, which was discovered near Pretoria, South Africa, in 1905.