Looking to make a big splash for its 10th anniversary, Dutch Diamond Technologies (DD) took on the challenge of crafting an all-diamond ring from a 155-carat plate of lab-grown material. 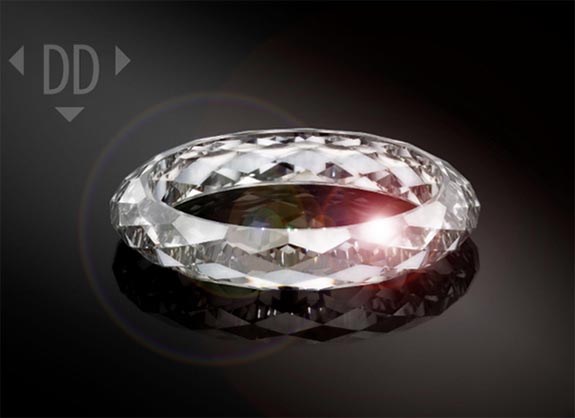 Dubbed “Project D,” the ring was polished using both laser cutting and traditional techniques. The end product boasts 133-facets and a total weight of 3.86 carats.

HRD Antwerp, Europe’s leading authority in diamond grading, determined that the ring has a clarity grade of VVS2 and a color grade of E, with excellent symmetry and very good polish.

The Netherlands-based Dutch Diamond Technologies is best known for its high-tech, industrial applications of both lab-grown and natural diamonds, so its foray into the jewelry sector came as a bit of a surprise, especially to the executives at HRD Antwerp.

“DD might be relatively new to cut diamonds for the jewelry market,” noted Michel Janssens, CEO of HRD Antwerp, “but they have created an impressive ring for their 10th anniversary. The outstanding cutting and polish work has resulted in a brilliant light reflection which emphasizes the beauty of the ring.”

“For our 10th anniversary we wanted to create something stunning that would highlight our innovative and high-tech techniques,” said Ton Janssen, CEO of Dutch Diamond Technologies. “I think we’ve more than succeeded with the one-off “Project D” ring. It’s a true ‘European’ ring: Grown in Germany, cut in the Netherlands and graded by HRD Antwerp in Belgium.”

DD noted that until a few years ago, the technology didn’t exist to create a lab-grown diamond plate suitable for “Project D.” The quality and carat weight of CVD synthetic diamonds has increased drastically over the past 10 years. DD reported that the 155-carat plate from which “Project D” was carved took five weeks to grow in its laboratory.

Dutch Diamond Technologies is not the first company to fabricate an all-diamond ring.

Shawish Geneva was the first company to form a ring from a single natural diamond. Shawish unveiled the innovative ring to the public during the 2012 Baselworld Watch and Jewelry Show. That ring was laser-cut from a 150-carat rough diamond. 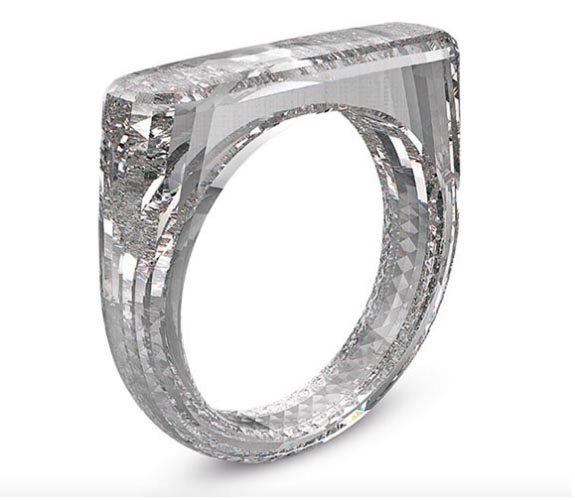 The ring is in production and is expected to be delivered to the anonymous buyer this June, according to JCKonline.com.